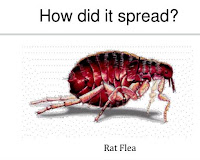 This disease is caused by Bacteria called " Yersinia Pestis" transmitted by fleas. Most commonly the Bacteria gets transmitted by the fleas on to the  animals such as rodents (rats), rabbits, and squirrels. Wild carnivores can become infected by eating other infected animals. Mostly occurs in rural and semi-rural areas. 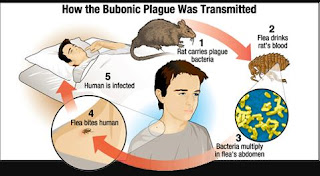 Is it treatable :
Yes. This Plague is a treatable with the careful use of antibiotics.

Treatment:
Early treatment is must. Giving antibiotics to the infected within 24 hours helps him/her to recover.
Antibiotics plays a vital role in curing the Bubonic plague. 7 day antibiotic series is the best preventative measure .

Incubation Period for this bacteria :
- 24 hours
8 days to show up symptoms.
-infects the lungs

Does this Disease Spreads by contact ?
No its not Contaminous. Bubonic plague rarely spreads directly from person to person.
Lives upto 60 minutes after being released into the air.
It can be even longer depending on the variable conditions that may exist.

India and Bubonic Plague:
In the year 1896 the 1st case of bubonic plague was detected in Mandvi in south Mumbai by Britisher Dr. Acacio Gabriel Viegas. Mandvi  has a high Muslim population. It killed Millions. 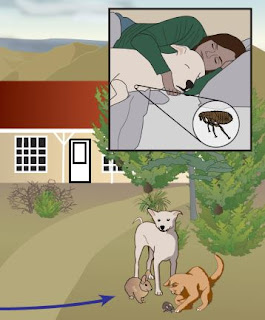 Humans and other domestic animals that are bitten by fleas from infected dead animals are at risk for contracting plague. Cats become very ill from plague and infect humans when they cough droplets into the air. Dogs are mostly resistive and are less likely to be ill. but they can still bring plague infected fleas into the home.