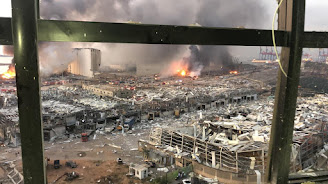 WORLD NEWS :
Beirut the capital and largest city of Lebanon witnessed two  Huge explosions.
Initial reports confirmed that there are hundreds of casualties, including dead and wounded
- The cause is still unknown
-  Internal security chief says the blast was in a port area with highly explosive material
- Many Sources claim that the Explosion is even  heard from 150 miles away in Cyprus
Beirut port is a very heavily populated area and Israel has long accused Hezbollah of storing explosive weapons in downtown Beirut.
Our deep condolences to the Government and the people of Lebanon, particularly to the families of all those who died at the tragic Beirut explosion's. We wish and pray for the speedy recovery of the injured
It is so massive and explosion look like an atomic bomb because of the Mushroom cloud that appeared during explosion.
Update on:
PRIMARY CAUSE:
Explosive material stored in warehouse in Beirut's port.
Watch the Beirut Explosions video recorded during the incident.